This chapter describes the second vision of Daniel, with the previous part four covering his first one in chapter seven.

It’s two years later, in the third year of the new king Belshazzar, with Daniel now in his seventies:

In short, it’s about two animals, a ram and goat, along the river Ulai in Shushan (now Iran), approximately 150 miles from Babylon:

Applying the same Historicism perspective as previously, this focuses on two of the four kingdoms already highlighted in chapter two (Nebuchadnezzar’s dream) and chapter seven (Daniel’s first dream), with more details and timings about the later ‘little horn’ period.

It causes Daniel to be face-down with fear and be sick as he struggles to comprehend what all this means at the ‘time of the end’:

“And I Daniel fainted, and was sick certain days; afterward I rose up, and did the king's business; and I was astonished at the vision, but none understood it.” – Daniel 8:27 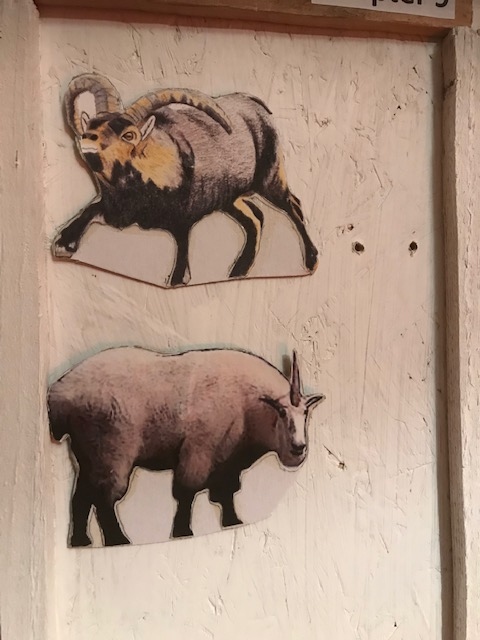 One of these animals attacks the other, which we can picture on the display with one above the other to represent one kingdom consecutively after another.

A ram first appears with two horns, one of these horns coming afterwards and becoming taller than the first one:

“Then I lifted up mine eyes, and saw, and, behold, there stood before the river a ram which had two horns: and the two horns were high; but one was higher than the other, and the higher came up last.” – Daniel 8:3

This ram becomes powerful with no opposition from the West, North, or South:

“I saw the ram pushing westward, and northward, and southward; so that no beasts might stand before him, neither was there any that could deliver out of his hand; but he did according to his will, and became great.” – Daniel 8:4 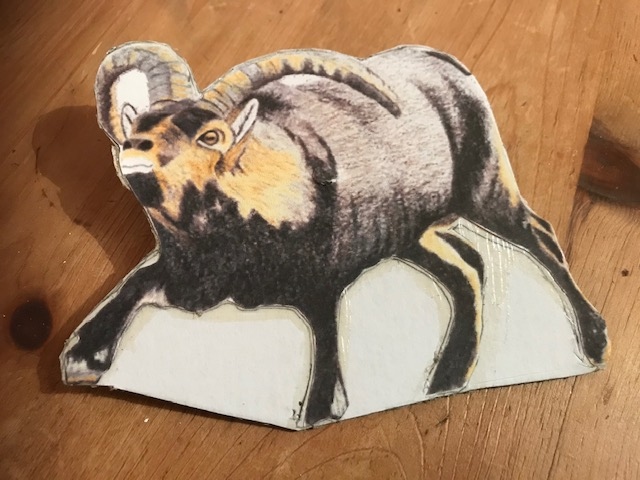 This not only matches the Medo-Persian kingdom in terms of details provided, but is specifically interpreted as so later on in the chapter.

The two horns are the two sides of the kingdom, with Persia being the greater and later one:

“The ram which thou sawest having two horns are the kings of Media and Persia.” – Daniel 8:20

These match with the second kingdom identified in chapters two and seven (Daneil is already coming to the end of the current Babylonian one). 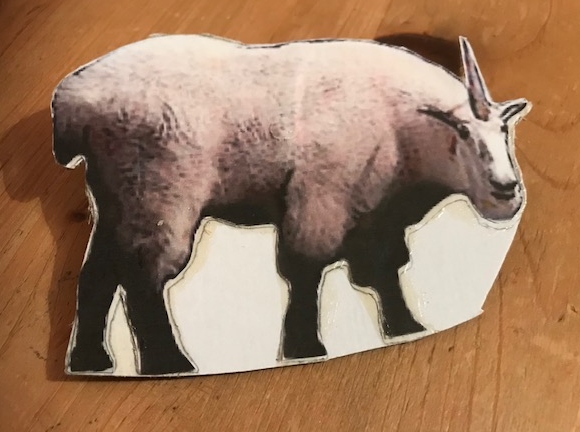 A goat then appears from the West, not even touching the ground, and having one horn:

“And as I was considering, behold, an he goat came from the west on the face of the whole earth, and touched not the ground: and the goat had a notable horn between his eyes.” – Daniel 8:5

This also is clearly identified later on, this time as Greece:

“And the rough goat is the king of Grecia: and the great horn that is between his eyes is the first king.” – Daniel 8:21

Again, this matches perfectly with the third kingdom of the previous chapters and straight after the Medo-Persian one.

This dominant one-horn, and swift goat not even touching the ground is comparison to Alexander the Great who conquered the world (described in part four).

Goats are even found to be symbols of the Greeks, with former leaders using images of horns on their heads.

We then have this goat attacking the previous ram, just like Greece conquering Medo-Persia. And ironically over a river, with Alexander’s troops learning to swim and cross waters in their ventures.

Therefore, we’ll place these two animals directly next to the other four animals and metals on the display to correspond to when these kingdoms took effect: 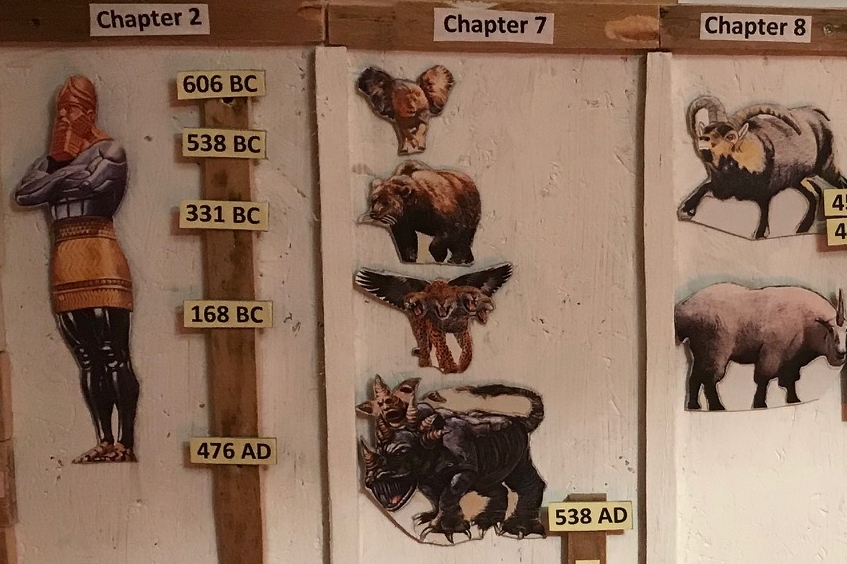 We now come to further details about the horns on these animals, first with the goat's two horns being broken, symbolising how the two forces of the Medes and Persians in this kingdom were defeated (and the whole animal being trampled):

“And I saw him come close unto the ram, and he was moved with choler against him, and smote the ram, and brake his two horns: and there was no power in the ram to stand before him, but he cast him down to the ground, and stamped upon him: and there was none that could deliver the ram out of his hand.” – Daniel 8:7

But we also have the horn on the goat damaged, even though this animal not only successfully fought the ram, but this horn in particular first became great:

“Therefore the he goat waxed very great: and when he was strong, the great horn was broken;” - Daniel 8:8(a)

We then see four new horns cropping up which mirrors the way in which the Greece kingdom was split into four areas after Alexander’s death as detailed in chapter two.

“and for it came up four notable ones toward the four winds of heaven.” – Daniel 8:8(b)

Just like in the previous chapter seven’s prophecy, we have a little horn then appearing.

It’s logical that this is assuming the same thing again, and although this previously referred to the Roman kingdom after Greece, this did lead then into the Roman era:

So out of the four main horns and Grecian Generals, the strongest of these was Cassander, which became the Roman Empire. It did push to the South (Egypt in 30 BC), and East (Syria in 65 BC), and then North and Palestine in 63 BC.

Applying the traditional Historicism interpretation of the old Reformers, the ten features of this little horn identifies how it symoliseses the Catholic church emerging as a new Papal religion from the Pagan Roman state. This began in 330 AD and ended in 538 AD.

The next four verses provide further detail of this transition. Although there are different interpretations on what elements are the pagan and what are the papal side, the end goal is still to go against God and His people.

Looking into the meaning of original Hebrew words here does help, for example ‘sanctuary’, ‘daily’, and little horn itself.

So, the male tense is used in the “which” reference to the little horn in verse nine which symbolises the initial state-pagan system rather than the more feminine papal-religious one afterwards:

In verse eleven, the word “Miqdash” for “sanctuary” refers to idol temple worship.

The original “taken away” word is “rum” which means lifted up and exhaulted, meaning this first system is trying in a worldly pagan way to be above and over God.

The “sacrifice” word was only added afterwards, with the remaining “daily” word meaning paganism.

“Yea, he magnified himself even to the prince of the host, and by him the daily sacrifice was taken away, and the place of the sanctuary was cast down.” – Daniel 8:11

In verses ten and twelve, the “it” and “him” words have a female emphasis:

“And it waxed great, even to the host of heaven; and it cast down some of the host and of the stars to the ground, and stamped upon them…And an host was given him against the daily sacrifice by reason of transgression” – Daniel 8:10-12(a)

Going back to the key verse eleven, you basically have this new feminine religious papal system emerging against the former “daily” pagan-state male one, and succeeding:

We are then provided with an important time period relating to this little horn and the beginning of this new anti-christ system.

Although we can’t begin to date this until the following chapter, this is critical to note, as two spiritual beings are seen by Daniel discussing between themselves how long this will last for:

“Then I heard one saint speaking, and another saint said unto that certain saint which spake, How long shall be the vision concerning the daily sacrifice, and the transgression of desolation, to give both the sanctuary and the host to be trodden under foot?” – Daniel 8:13

Daniel then receives a clear answer from one of these beings in the following verse, of 2,300 days:

It also states what will happen to the “sanctuary” at the end of this period, which uses the Hebrew word meaning “Qodesh” which implies God’s temple not man’s or paganism’s temple.

This must mean the ultimate heavenly sanctuary, as no others existed on earth at the time, with Jerusalem and the temple still being destroyed whilst Daniel and the Israelites were in exile in Babylon.

After this Daniel seeks meaning on this whole chapter’s vision, with someone then appearing and asking Gabriel to interpret this.

Details are provided on the ram and goat as above, and then how the ‘little horn’ goes against God Himself:

“And through his policy also he shall cause craft to prosper in his hand; and he shall magnify himself in his heart, and by peace shall destroy many: he shall also stand up against the Prince of princes; but he shall be broken without hand.” – Daniel 8:25

However, nothing else is revealed about the 2,300 days (evenings and mornings) time period, and Daniel is told to actually close-up this matter which refers to a long time in the future.

A popular interpretation of this little horn is Antiochus from Seleucus who killed tens of thousands of Jews with 2,300 days between 171 BC when he killed the High Priest to when he died in 165 BC.

However, as in the previous chapter seven, he does not fulfil all ten features of the little horn, and it concerns the cleansing of the earthly temple sanctuary.

Fortunately there is more detail and timings to come in the following chapter nine. 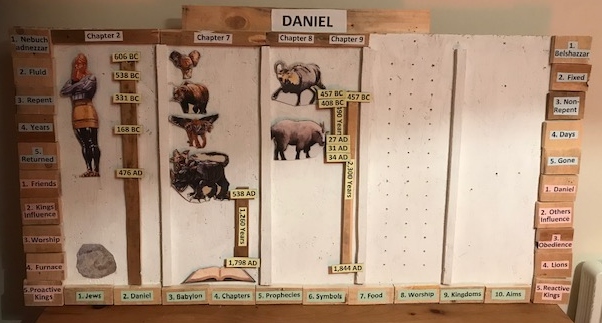