As we begin to look into the weekly Sabbath rest, this first point regarding timing is the easiest to understand and accept in one sense; however, it has complicated consequences afterwards.

There are two sides to this point which we’ll look at.

The first is that this ‘original’ weekly Sabbath day of rest is a Saturday, not a Sunday. On a numbering system, this is the seventh day of the week.

The second is that the official start and end times of this day are different from what we are used to.

1. The Day is Saturday, Not Sunday

Back in the Old Testament, when Sabbath-keeping (and other commandments) are seen as relating to the Jews, this day seven of the week is definitely known to be a Saturday.

Even the Jewish community and faith today still abide by this day.

Sunday is, therefore, technically the first, not the seventh day of the week.

All theologians accept this, arguing that the Sabbath is either no longer applicable for Christians now or was changed to a first-day Sunday. There is no dispute over the ‘original’ Sabbath being a Saturday.

A good biblical reference to this is Jesus’ death and resurrection. Despite whether or not you believe this day changed after His resurrection, the matter is that Jesus Himself and others observed this seventh day, which records confirm as what we now call Saturday.

The actual day of His death was the sixth ‘preparation day’ just before the seventh Sabbath day, where he rested in the tomb. His resurrection was then on the first day of the week, which we now know as a Sunday.

Luke describes this in the New Testament, who was a Gentile rather than an allegedly biased Jew:

“Now upon the first day of the week, very early in the morning, they came unto the sepulchre, bringing the spices which they had prepared, and certain others with them.” - Luke 24:1

The word 'Sabbath' is also the same word for the day of 'Saturday' in at least twenty-four languages.

From a scientific perspective, leading astronomers agree that the weekly seven-day cycle has never changed, with links to agreement from the Royal Naval Observatory in the US and The Royal Greenwich Observatory in England.

This daily cycle is the same rotation pattern of the earth now as it has always been. Even though there have been changes in the yearly calendar from 360 to 365 (or 366 for leap years) days reflecting the world rotating around the sun and months reflecting the moon's linear cycle, the core 7-day weekly cycle has remained the same.

2. The Time is From Sunset, Not Midnight

Our current calendars are used to days commencing at midnight each evening until the following midnight.

However, in Scripture, the beginning of the day was when the sunset that evening, not a set time like midnight.

Notice the reference to this starts and end of 'even' in Scripture:

“And God saw every thing that he had made, and, behold, it was very good. And the evening and the morning were the sixth day.” - Genesis 1:31

“It shall be unto you a Sabbath of rest, and ye shall afflict your souls: in the ninth day of the month at even, from even unto even, shall ye celebrate your sabbath.” - Leviticus 23:32

Such ‘even’ times are clearly outlined elsewhere in Scripture as being points of the sun going up and down in the afternoon/evening:

“When evening shadows fell on the gates of Jerusalem before the Sabbath, I ordered the doors to be shut and not opened until the Sabbath was over. I stationed some of my own men at the gates so that no load could be brought in on the Sabbath day.” – Nehemiah 13:19 (NIV)

“And at even, when the sun did set, they brought unto him all that were diseased, and them that were possessed with devils.” - Mark 1:32

This creates different times in the different seasons of the year for when nighttime begins and ends.

Therefore, the ‘original’ Sabbath in the Old Testament was a Saturday rather than a Sunday and ran from a Friday early evening at sun-down rather than midnight.

Most people don’t disagree with this once looked into and how it begins and ends at sunset, The question is then whether this changed or became obsolete later on, which we’ll come onto.

I believe that this Saturday Sabbath is still the ‘original’ one that God has blessed and prescribed for all Christians today.

My attempt to show this on the Sabbath Camper display is to have a specific road around the board for this Sabbath camper ‘experience’ to follow. 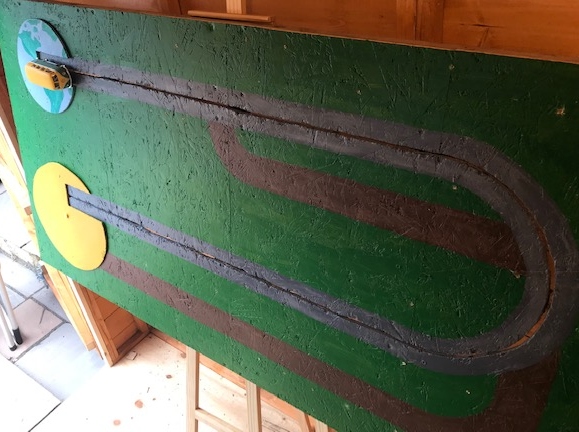 This is a Saturday road, as it were, coloured grey. However, we’re going to introduce an alternative brown Sunday track halfway around as we journey along, just after Christ was resurrected and the early church began, which Sunday-keeping stems from (the other brown track will be explained later).

We'll come back to whether this is correct or not later on. But, for the moment, the point is that the original ‘road’ that the weekly Sabbath experience was made for was a Saturday; and post-Christ, there becomes an alternative that is actually on the first, not the seventh day of the week.