The previous section looked at how the Sabbath is referred to in the New Testament, and how the first day of the week is raised; this is where the current position of Sunday observance stems from.

This section then looks into how the change to Sunday observance developed over history and some general observations.

The first century after Christ's life on earth with the original apostles and church-planting is recorded in scripture, with Paul warning about how apostasy would increase after him, causing a falling away from the truth:

“Let no man deceive you by any means: for that day shall not come, except there come a falling away first, and that man of sin be revealed, the son of perdition;” – 2 Thessalonians 2:3

When the temple in Jerusalem was destroyed around 70 AD, there was an influx of Gentile believers into the church resulting in a reduced Jewish-believer influence (early Christianity was classed as part of the wider Jewish community).

Practically the Saturday was still a day’s rest for Jewish believers; however, the Romans had a rest every 10 rather than 7 days (although there was no rest day for slaves, which included many Christians).

Therefore, Sunday was a working day, with any meetings at this time needing to be in the very early morning or later evening.

Over the second and third centuries, there was increased persecution of Christians from the Roman empire; however, with the church still growing.

There was also an increased anti-Jewish sentiment and influence of paganism and philosophies like Gnosticism.

The main Roman Empire cult also became Mithraism, otherwise know as sun-worship, with 'the Venerable Day of the Sun' being the first day of the week, hence being called 'Sun'-day.

Therefore, the influence of converted pagan-Christians and sun-worship (along with new Christmas and Easter celebrations) has arguably affected the core Christian faith. This caused a mixture of both Sabbath and Sunday observance to emerge.

Early church forefathers like the Epistle of Barnabas and Augustine, therefore, began referring to Sunday. There was an increasing influence from Greek-Philosopher Gentiles with no Jewish background and increasing anti-semitism.

“Early church historians Sozomen and Socrates cite the seventh day [Saturday] as the Christian day of worship except for the Christians in Rome and Alexandra” (Wikipedia: Sabbath).

“In many places and times as late as the 4th century, they did continue to gather weekly on the Sabbath, often in addition to the Lord’s Day, celebrating the Eucharist on both days” (Wikipedia: Sabbath in Christianity)

A Roman Governor called Constantine became a Christian in the fourth century, although there is scepticism about how genuine this conversion was.

He openly encouraged Christianity and helped bring an end to Rome’s persecution of Christianity.

As Empower of Rome, he brought in a civil law to preserve Sunday as a day of rest which would appease former pagan believers who were now used to this day of rest from former sun-worship.

Therefore, the first law regarding Sunday observance came on the 7th March 321 AD, which stated:

“On the venerable day of the sun let the magistrate and people residing in cities rest, and let all workshops be closed. In the country, however, persons engaged in agriculture work may freely and lawfully continue their pursuits; because it often happens that another day is not so suitable for grain or vine planting; lest by neglecting the proper moment for such operations the bounty of heaven should be lost”.

The focus was to declare Sunday as a day of rest for society, which the church then welcomed.

This was the beginning of a church-state mix, where religious belief was now affecting secular laws.

The mainstream Christendom faith then agreed that this declaration of the Sunday as the new ‘Lord’s Day’ was actually by their declaration as the superior religious influence in the world.

In 325 AD, Pope Sylvester officially named Sunday as the 'Lord’s Day' a few years after Constantine had brought in the legislation and compatibility with the state.

The Catholic church both did and still do accept that Saturday is the correct Sabbath day. However, they state that this is no longer applicable and that Sunday is now a new ‘Lord’s Day’.

In 338 AD, Eusebius, the court Bishop of Constantine, wrote:

“All things whatsoever that it was the duty to do on the Sabbath (the seventh day of the week) we (Constantine, Eusebius, and other Bishops) have transferred to the Lord’s Day (the first day of the week) as more appropriately belonging to it.”

There was then agreement from the Council of Laodicean in the later fourth century as the official religious validation of this new day.

They emphasised how they believed that the early apostles through to themselves had the authority to reshape matters of faith moving forward.

“The Seventh-day Sabbath was...solemnised by Christ, the Apostles, and primitive Christians, till the Laodicean Council did in manner quite abolish the observations of it." (Dissertation on the Lord's Day)

Furthermore, in the Catholic Catechism, certain questions and answers are declared:

It’s important to note how the church at this period was effectively what we now know as Roman Catholicism.

In the Roman Catholicism version of the Ten Commandments, one commandment about image-worship has been removed, and the Sabbath-keeping one changed to a Sunday and called the ‘Lord’s Day’ instead.

They had a fuller influence over society from around 538 AD and then started banning Saturday observance, not just encouraging Sunday observance, even if this meant death for people.

The Dark Ages then followed for many centuries before Christian Protestantism began through the Reformation in the sixteenth century.

Even in the Council of Trent during the Reformation between Catholicism and the newfound Protestant beliefs, Archbishop of Reggio stated that Protestants couldn’t claim full reliance upon scripture because of accepting the (Catholicism) church’s Sunday observance position rather than the original seventh-day Saturday as a Sabbath day.

A new 'continental Sunday' is also thought to have come from the Reformers like Luther and Calvin. It introduced things like sports on a Sunday to express new freedom by grace.

As an aside, the great Reformers believed in the Sabbath to some degree, even if still on a Sunday – Martin Luther, John Wesley, John Wycliffe, William Tyndale, Charles Spurgeon, John Calvin, Dwight Moody, Billy Graham, Wingley, Augustine, Calvin, Whitefield.

However, later in the seventeenth century, there was an increase in Saturday Sabbath-keeping (although this had always continued over the centuries in some small form or another).

On the Sabbath Camper display, I've added signs along the bottom Sunday track to highlight how these five key stages of change regarding Sunday has evolved since Christ, namely the early few centuries, Constantine, the authority of the catholic church, the Dark ages, and then modern denominations. 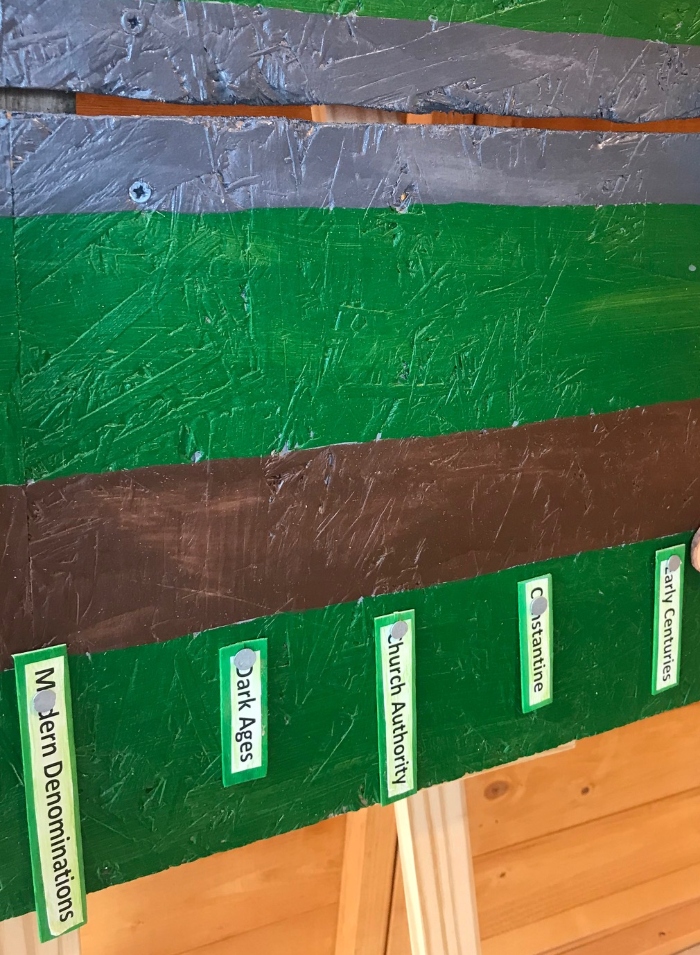 After observing Sunday myself for any weekly rest or church fellowship for over forty years, I understand the difficulties of challenging this.

As I believe God has shown me the meaning of Sabbath on a Saturday, then I have come to appreciate other more general and practical pointers about the assumed Sunday position:

It is still vague and not generally understood by Christians, no matter what position they take.

Most accept Sunday from church life pattern today, with many church denominational beliefs ironically accepting this Sabbath and moral-law-observance principle when looked into, but then assuming Sunday is correct.

Few then actually take Sunday as a full rest if they believe it is a new Lord’s Day Sabbath, often based on convenience and preference.

Christ is assumed to have commanded the celebration of Resurrection Sunday, which has turned into a new form of Sabbath; however, as in early sections, this isn't the case.

In fact, baptism is described as a symbol of the Resurrection of Christ, not worship on the first-day Sunday:

“Know ye not, that so many of us as were baptized into Jesus Christ were baptized into his death? Therefore we are buried with him by baptism into death: that like as Christ was raised up from the dead by the glory of the Father, even so, we also should walk in newness of life. For if we have been planted together in the likeness of his death, we shall be also in the likeness of his resurrection” – Romans 6:3-5

Even though the Saturday Sabbath in the Ten Commandments is claimed to be done away with, modern Christianity still applies and accepts other Old-Testament Covenant practices.

These include incense and altars, rituals like the Jewish festivals, and the role of prophets and extreme miracles.

However, I have noticed the biggest one as paying a 10% tithe to churches, which is still common practice. Not that this is wrong if from the right heart, but it’s interesting how this part of the Old Testament is gladly practised by churches now with no clear New Testament commandment rather than Saturday Sabbath observance.

I found that if you read the whole Bible with an open mind, the Saturday Sabbath principles naturally sticks out. In contrast, it feels like you now have to work at seeing any implication of Sunday observance in the New Testament onwards.

As mentioned earlier, several occasions when I’ve been part of Kids & Youth groups and classes at church, I have seen this in their simple child-like faith as they ask why the fourth of the Ten Commandments is still not followed by going to church and resting on a Saturday, not Sunday.

Interestingly, the world’s best entertainment nowadays is traditionally between Friday and Saturday night which falls over the Sabbath, not a Sunday.

If this day is still applicable, then the world ironically treats this day as the most worldly one of them all.

Over the centuries, there has been the harsh treatment of Saturday Sabbath-keepers with a greater Sunday focus.

However, surely those assuming Sunday, or no day, would assume that it’s okay for people to take whatever day of the week as a day of rest as per scripture reference in the New Testament.

It’s only within the last few hundred years that the belief has begun within Christianity that no day of Sabbath day is now applicable.

Christianity over the centuries has always believed in a weekly Sabbath day rest and genuinely thought that Sunday was the correct day as ordained historically and instructed in the Ten Commandments.

Therefore, once you identify that Saturday has always been the Sabbath day with no clear commandment in the New Testament to start a new Lord’s Day to celebrate the Resurrection, this subject becomes simpler and makes more sense.

I've noted these seven general Sunday observations on the Sabbath Camper display in a general marker right at the end of the bottom Sunday track. 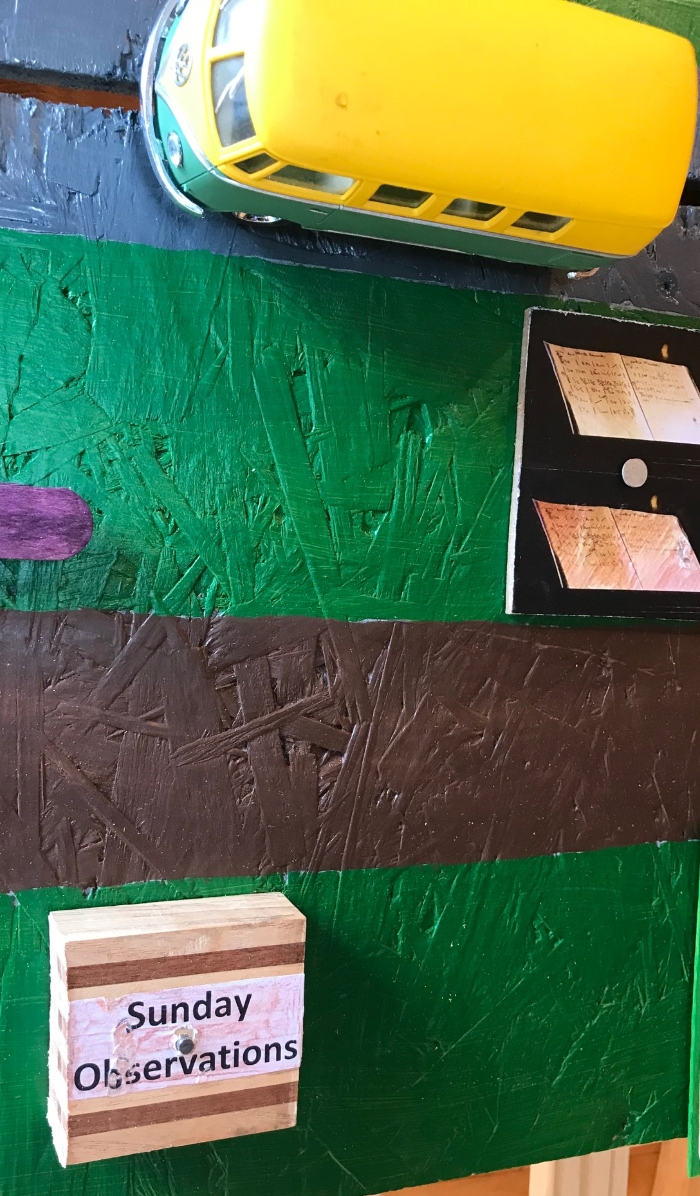